A midst the craziness of the first day of school yesterday for Rachel and Cordelia (grade 2 and SK), Kingsley had his follow up appointment with his neurosurgeon. The MRI showed nothing of interest! Everything was stable - his ventricles, his (potentially tethered but asymptomatic) cord, his (also asymptomatic) Chiari Malformation, and his syrinx which is all the same size, no bigger, no smaller and not causing any drama.

The girls had great first days of school. They both love their teachers and were excited to see their friends. No tears! 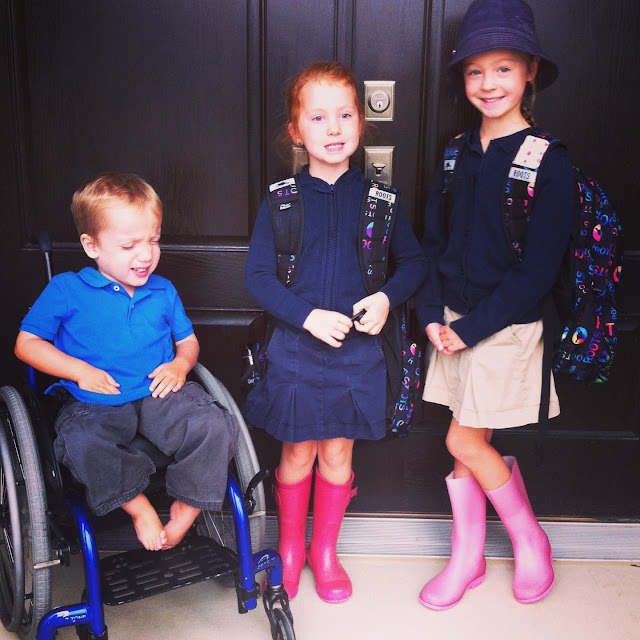 except Kingsley. he cried. smiling for pictures is pure torture before 9am.
Posted by Jill at 9:06 PM 2 comments: Links to this post

I think today was Kingsley's eighth MRI, but I could be wrong. I've honestly lost track. They're just checking things out, for once. We don't have any obvious concerns, but neuro wanted a follow-up after last years virus, and to check the syrinx, the possible retethered cord, space for the Chiari, etc.

This was the first time I've talked to him about it before hand. The Pre-Admit Clinic gave us a print out of pictures to talk to kids about and give them a visual description of what would be happening. Last night, we chatted about it and I showed him the pictures. He started crying. He said he didn't want the mask, didn't want to go to sleep, didn't want to go to the hospital. I was able to talk him down a bit and let him know that I'd be there and I'd be with him when he went to sleep.

This morning, I opened his door and his first words were: "Be-tuz I don't want to have a nap and I'm scared of the mask!!" Oh, buddy. :( 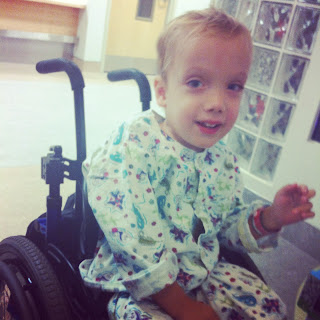 He did amazing though, truly. He was scared. He cried when the nurse put his bracelets on and kept asking for chocolate pudding. We spent most of the morning snuggling and reading books. When it was time to go in, I carried him and he told me how scared he was again. I laid him down on the gurney and the anesthesiologist was so wonderful, talking to him and trying to keep him calm. When they put the mask on, I reminded him that this was just sleeping medicine and it was going to be okay. He just nodded, held my hand, breathed slowly, and drifted off to sleep.

Crush my heart. Three year-olds should not have to be this brave.

He woke up in a great mood, making the nurses just fall in love with him. We watched Curious George and shared a popsicle until he was allowed to go. While we were there, one of the nurses showed me his hospital file. It was about three inches deep. This kid is going to need his own shelf by the time he turns ten.

We get the results in one week. 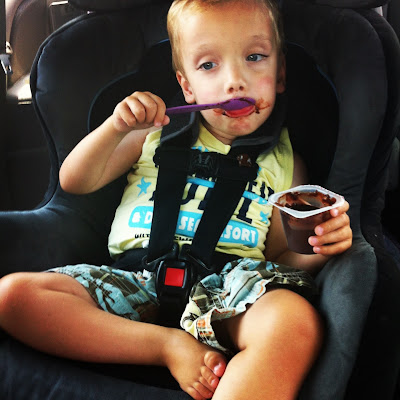 We saw his neurosurgeon today. She said his syrinx is still there, still significant, but stable. She asked a whole bunch of questions about what we've been seeing, what Kingsley has been doing, what the concerns are, what changes he's had. She believes they are because he is doing so much more, using so many more muscles in different ways and so there are some side effects - his hamstring is tight because he's realized he can bend that knee to move around and so bends it (he doesn't have the quad muscles to stretch it straight again). The increased twitching is enervation and conscious movement where before it was passive. He's just doing well.

One small shadow: his Chiari area is a bit tight. She asked about his eating and if he chokes and whatnot. He isn't showing any symptoms that concern her, so no surgery now. She is not keen to jump in and open it up more without a really good reason, as doing so could cause more problems so there's no point in putting that risk out there without a very good reason. The same with putting a shunt in his spine to drain the syrinx - there are no guarantees that it would help the situation and no guarantees that it wouldn't make things worse. So, while everything is stable, no surgery. If he has significant changes, we'll have to look into those things.

More good news! His brain is perfectly wonderful. His shunt is working perfectly. There is nothing there that would be causing language problems, as far as she could see, so the delay is just a delay that he will work through, as far as anyone can tell.

This is all pretty much beyond what I could've hoped for. I was imagining terrible things and not a single one of them came true. It's like Christmas morning, his birth day and winning the lottery all in one.

This afternoon, my sister came home to celebrate with us. Really, they came home for Christmas, but this was a pretty good second reason. ;) Christmas can officially begin again. All is well.
Posted by Jill at 10:12 PM 10 comments: Links to this post

The Cheer has Left the Building

We have had a couple of really rocky days here.

Last Thursday was Kingsley's MRI. The morning began as usual until I got a call from my mom telling me that my aunt had passed away in the night. She had had health problems, but this was unexpected nonetheless. It was a heart attack that was the conclusion to a number of very hard years for her. I am so sad to lose the wonderful woman that she was. I know that she's at peace now, but I'm just so sad.

Kingsley's appointment was supposed to be at noon. The poor guy had not eaten since 6:30 the night before and was doing so incredibly good about it when we checked in at 11:30. We were told that they were behind by about 30 minutes. Thirty turned into 60, then 90, then 2 hours. He finally went in just after 2:30. It took him longer to fall asleep this time, which was horrible. I just held him while they held the mask on his face and he cried and cried. I hate that part so  much, but I cannot imagine him going through it without me there.

I have heard mom's say before that they feel badly complaining about how scared they were when their kids went in for tonsil removals or other routine procedures, because compared to brain surgery they are not that serious. I'm telling you though, it doesn't matter what the procedure. Kingsley was put under a general anesthetic, he had an IV and was intubated for his MRI. That's all and I was about as terrified for this as I was for his two brain surgeries. Trusting people to do things to your child is a very scary thing. With my heart in my throat, I waited the long hour and a half until he came out.

They rolled him out and I could just not believe how big and brave he looked, lying there on the bed with his head on a pillow like a big kid. They said he didn't cry or even whimper in recovery. So proud of that guy. We took him home and he was back to himself within the hour.

I had begged them to send us an email as soon as they saw the scans, no matter the results. I needed to know if I could relax or if I should cancel Christmas and start arranging childcare. I did get an email the next day and the answer was somewhere in between. The syrinx is still there, that nasty devil. I did not know that it was possible to hate a part of my son so deeply, but I hate that syrinx with all my being. I want it gone from our lives or at least made insignificant. Instead, it haunts us. It may or may not be causing these problems. It may or may not require more surgery. It's not urgent, but it's not good.

We have our follow up appointment first thing tomorrow morning and then King's neurosurgeon will assess him and let us know her thoughts about surgery in the new year.
Posted by Jill at 8:34 PM 4 comments: Links to this post