The past year or so has been quite educational as far as what is accessible for children in our city. Kingsley has now had his wheelchair for 16 months and in that time I have been endlessly brainstorming about ways to keep him busy. Some places have been awesome. Some are total flops. There are so many things to do, places to go when you have children. So many places that you take for granted. You might notice how hard it is to maneuver a stroller through Gymboree, how inaccessible shopping is downtown, and even get irritated when the automatic door buttons are broken, but until you have an independently wheeling child, those annoyances suddenly become barriers in the most real sense.

Here is my run-down on the places in our 'hood that people hang out with kids:

1. Parks: there are designated parks in London that are meant to be more accessible and disability-friendly. It's a bunch of hooey. These parks usually include a play structure with a single ramp that Kingsley can roll up and hang out on a platform that then has steps up or down to get to the action. Sometimes there might be a bubble thing for him to look through. Wow. They also have dips in the concrete pathways that lead down to wood chips, I assume so that he can roll down into the wood chips? Brilliant. Unfortunately, the wood chips aren't usually topped up, so no matter where you're rolling into this section, you're dropping off a curb to get there. Into wood chips. 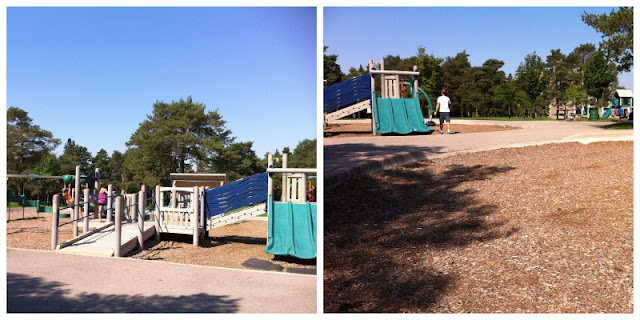 wow! a ramp to stairs and a drop in the curb to roll on into those fun woodchips

There is usually a swing there that is for people with physical disabilities, in that it's a huge chair with a bars that come over your shoulders and connect between your legs, kind of like on a rollercoaster. They're adult sized. I read the fine print on the swing once, just trying to find out it's purpose as it is so big it fits two of my children at once. It says there are additional straps to support smaller people. The straps are not there. 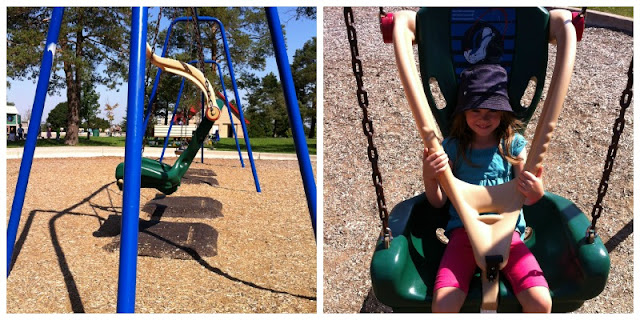 There is ONE park we have found and - gloriously - it's the one closest to our new house! It has three whole ramps for King and each ramp leads to an actual activity, a piano, a finger maze, and I forget the other thing. Kingsley loves it. There are still wood chips, but (at least last summer) they were topped up to curb level and he loved to sit and play in them. It's a big playground with a lot of paths. It's not perfect, but it is somewhere that we can all go and have fun. 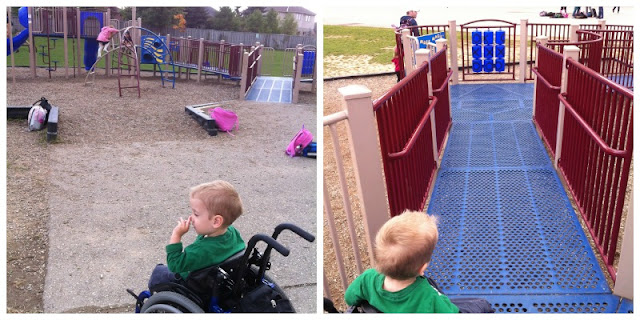 2. StoryBook Gardens: this is a big thing in our city and kids love it. I LOVED it when I was a kid, though it's changed a lot since then. When Kingsley was a baby, this was a great place to take the kids. Kingsley would nap, nurse, people watch, play in the huge sand pit, and have a great ol' time while the girls played. Now, not so much. The park itself is accessible and has lovely paths, but none of the structures, rides, or activities are wheelchair friendly. Kingsley is no longer content to sit and watch, so this place is out. Sadly.

3. Children's Museum: another huge thing for kids in our city and was when I was a kid as well. This place is accessible, has an elevator and ramps, activities at his level and that he can access, lots of fun. However, the museum has HUGE safety hazards in the form of big wide open stairwells on the upper levels. They are central stairs, right in the middle of the action and there is nothing to stop Kingsley from flying right down them or have another kid bump him in that direction. I am shuddering even typing that. There is also a big wide open stairwell down to a mermaid sand pit, where of course King loves to play. It gives me nightmares. It's on my to-do list to email them and tell them to put in some flippin posts at the top of the stairs, for Pete's sake. Until that happens (and I'm not holding my breath), we can't hang out there unless I'm one on one with King.

4. Indoor Playlands: there are basically three in this category - Adventures on Wonderland, Kidscape, and McDonald's. McDonald's is pretty much the same everywhere and they aren't accessible, not even remotely. And it's McDonald's. Kidscape and AOW have the same problem, being that they aren't accessible. They are big places with different spaces within them, lots of kids running here, there, and everywhere, back and forth. He can get in. He can sit and watch. As a baby, there were big mat areas where he could play, but that got old when the only thing I could do with him was PT exercises. Boring mommy ;)

5. Skating Arenas: they are accessible! We haven't been able to go this year, since my PT laughed at me when I asked if I could skate with a torn ACL, but last year we went and King had his borrowed sledge and did great. I have heard that you can even borrow sledges if you call ahead, but I don't know if that's true. The change rooms are just benches, like any skating place, I suppose. I'm not sure I've ever seen a change table, nevermind an accessible change table. We don't hang out long though, so have never needed one.

6. City Swimming Pools: they're kinda iffy. I mean, they are accessible, but not overly. A couple of them have lifts or ramps, but the city-run pools don't really have accessible change tables or spaces to change King other than a bench. It's fine now, at this age and with his abilities, but I know others have had issues with this. It's part of why we've put in a pool at our new house.

7. YMCA: oh, boy, I had high hopes for this place. ;) Fortunately, they have not let me down again! It's great. The change room is great, the pool has a ramp and a lift (though not to the shallow end, but this doesn't bother us right now). The gym, the playrooms, the activities for kids, and the whole place is very inclusive. Kingsley can go anywhere and do (almost) anything. They have a Treehouse room with a structure similar to the indoor playlands, but different in that there are things on ground level that King can wheel into/under. I've only gone to the one in the north end, but I hear the other Y's are also good.

8. Libraries: I can't say enough about how much I love our public libraries. We've been to a handful now, and not one has disappointed us. They all have train tables, books (obviously!), computers, tables at Kingsley's height, toys, floor space to sit and hang out... they're just awesome. We go weekly, sometimes more, all year round. All three kids love them. I love them. We love them. Except the family bathroom in the Westmount one has a hugely heavy door that does not have a button to open it. It's ridiculous. But other than that, love. ;)

9. Movies: Jeff and I have always been drive-in people. We used to drive his half-dead car with the dead stereo to the outskirts of the city and listen to the movies on a beat up old ghettoblaster that ate batteries for breakfast. It was cheap and we could bring our own snacks. Anyway, it's also a great place to bring babies because you can roll up the window or strap them in a wrap and go for a walk if they started to cry. Now, the kids understand what 'adult movie - go to bed' means so we wait until the first movie is a family movie and pack up the kids. The location itself is not accessible, not the bathrooms (unless there's separate one I've never noticed?),  not the gravel paths, nor the playground. But, we can all go and hang out by the van and play, get comfy in chairs and make it work for now. 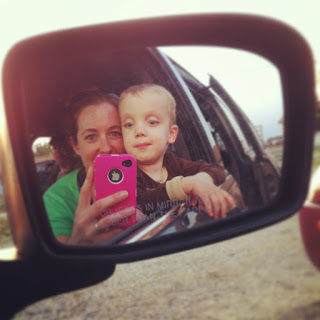 We took Kingsley to his first movie theatre a week ago! It was great and he did surprisingly well, quite surprisingly considering how big and loud the theatre is. The only issue is that the wheelchair spaces are all down in front and the good theatres are the really big ones which means you'd have to be looking up to watch the movie. Not my favourite place to sit. We parked his wheels and he sat on my lap, which is where he wanted to be anyway.

10. Other People's Houses: this is one that is starting to become a problem and I don't see that changing. He's outgrowing his Bumbobile. His little bum and skinny legs fit in the seat just fine, but it's low to the ground and at his age, kids start to stand up more. To be at the level of his peers/sisters, he prefers his wheelchair or stander. Unfortunately, people's homes are not generally designed to be accessible so his big wheels don't fit and kids don't stay put. They run upstairs to show you their room, run downstairs to grab more toys, want to play outside... And Kingsley is left there with me and the other mom. I am getting better at inviting people to our house to play, since it's pretty kid friendly and King can obviously get anywhere. Even going downstairs, other kids are very eager to wait for Kingsley since it means they get to ride the elevator. This is one hurdle that won't get any easier as he grows up, but I'm not dwelling on it yet. We will tackle it as it comes.

11. Bowling: this is one rare gem that we've stumbled upon. There's a cool place here called the Palasad where you can play arcade games, bowl, eat, and a bunch of other stuff. There was one right by our old house that underwent big renovations and one of the things they did was make it completely accessible! I took the kids to a birthday party there recently, full of anxiety, and as soon as I walked in the door a staff member appeared out of thin air asking if King was going to bowl and they had a ramp there before we even got to the alley. I haven't been to the other big bowling-fun place here, Fleetway, but I'm told they are connected with an organization for adults with disabilities and have made sure it's accessible for everyone. 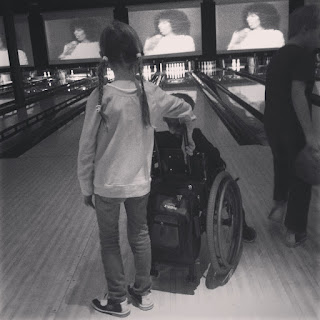 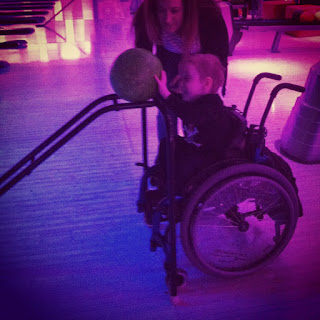 That's about all that I've found. The malls are also all accessible, but Kingsley's not a huge fan of shopping without an ice cream bribe. Fortunately right now we are surrounded by construction, which is still endlessly entertaining for Kingsley. When we get really bored, we walk up the street to the end of the subdivision where they are preparing the next field for an apartment building. There are a lot of diggers and dump trucks, cement trucks, and cranes around here. The construction crews are so friendly to Kingsley, waving and honking their horns. He loves it.

If there are more places to go that I don't know about, let me know! It's going to be a long summer. :)
Posted by Jill at 10:11 PM 3 comments: Links to this post