The casts came off today.

It was a very strange day. Kingsley didn't want to take the casts off. He kind of gets set in his ways that way, once something is a certain way it has to be so. I don't think he was actually attached to them, but we did make the mistake of calling them 'Thomas blue' to match his Thomas costume and so he was very sad that he'd have to have his Thomas Casts taken off. He's very sad that Halloween is over.

His casts were cut off without any drama (though don't you have that moment of panic where you're sure that the saw is going to accidentally slice through skin??) and his surgeon came in to check on him and see how his legs had healed. She was very happy, they're straighter than even she thought they'd be able to be.

Kingsley lay there as the three of us stood over him - the man with the saw, the surgeon and I. I was watching his legs as we were chatting and suddenly I noticed something.

His surgeon tried to reassure me, he'd probably need some time to strengthen the muscles again, he'd get the strength back...


This whole thing came about because Kingsley has a bit of hamstring, but no quad. He can pull his legs up, but not put them back down. He bends at the knee, but not straighten. Not at all, ever. He pulls his legs up, bending his knees and unless gravity pulls them back down, they stay there, bent.

"IT'S A CHRISTMAS MIRACLE!!" the saw guy seriously said that with a huge grin and I almost high-fived him.

His surgeon thinks it's more likely that he was so tight he wasn't able to push back against it, but she couldn't say for sure. We will have to see what happens next.

I was so excited!

You know the term 'bittersweet'? It pretty much defines SB. Right in the middle of giving King another thumbs up for kicking me I heard this bored voice in the back of my head: so what?

Really, what does it matter? He isn't going to walk. He isn't going to stand. It's very sweet that something new and unexpected happened, that the surgery was such a success, but nothing really changed, that's the bitter truth.

I am very thankful that the surgery was such a success. I'm trying to see this new little movement as a sign that he really did need the surgery to happen. As a parent, entering the world of 'elective surgeries' is a very scary place to be. Potentially putting Kingsley through a surgery that ended up being useless somehow making things worse would be dreadful. That didn't happen, so huge sigh of relief there. 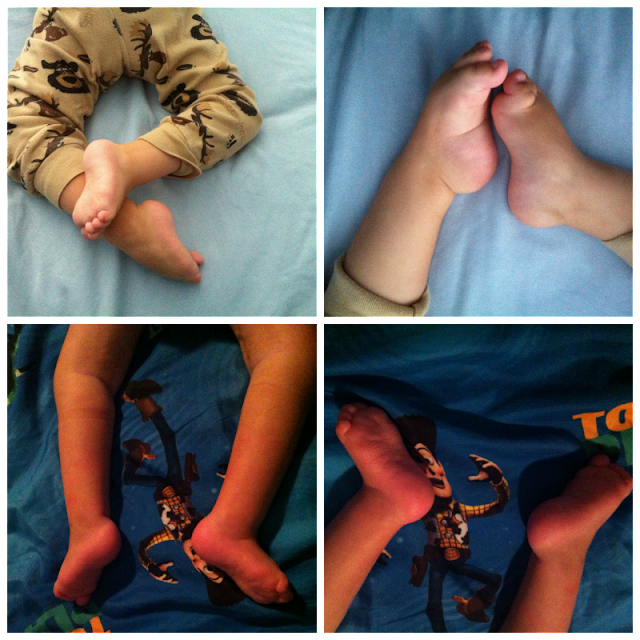 Before and After: the top is before, which should be obvious. This is as straight as his legs would be when he lay on his tummy. His feet are upside down, sorry, but you can still see how pronounced his 'ballerina foot' was compared to now when it's just a foot.

Tomorrow, we see his orthotist and he will be fitted for new AFO's and we will talk about RGO's. Kingsley has loved being able to be lifted into standing at any time with his full leg casts/splints on the last 5 weeks. He has finally expressed an interest in standing and walking, which has never happened before. This is perfectly timed with new gear that will get him more independently upright than his stander. He will need a lot of motivation to use RGO's and he seems to have it. Fingers crossed for our next adventure.

Kingsley is still doing great. He gets his casts off on November 18. We saw the surgeon last Monday and she took off his big white casts and replaced them with lighter blue ones (to match his Thomas costume, of course!). I finally got a look at his legs and his incisions. Well, sort of, they were under bandages still.

It all looked good! The surgeon said I could take off his zimmer's to give him a break and some air, but he doesn't really care if he gets a break or not and his bare legs kind of give me the hibbie jibbies. I'm so afraid of messing things up. Once a day I take them off, inspect his legs, have him bend a bit and then I put them right back on. I did end up taking the bandages off all of the way to see the incisions. I really need to toughen up because there was a lot of squeemies and even a bit of nausea. They look great, they're healing well. I just couldn't get Molly Weasley's voice out of my head (please, someone tell me you know what I'm talking about).

His legs are so much straighter. It's so strange. The bend and tension in his legs was so much a part of him, to have his legs just straight and flaccid is a little disconcerting. They seem really long! 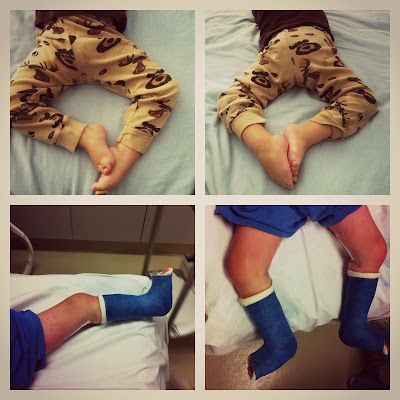 the top ones are his legs at rest before surgery. that's how his legs pretty much always were.
the bottom are one week post-op when he got his new casts. his legs rest a bit straighter than that even.

Kingsley is still doing great and is completely unbothered by his casts or splints. He moves around just fine (the splints are FILTHY) and he hasn't had any trouble sleeping, which is good because I'm going to make him sleep in these splints for the rest of his life. He does great in his stander.

So, yup. Halfway there now. Still incredibly grateful that this is going a million times better than it could have gone.
Posted by Jill at 10:53 PM 2 comments: Links to this post

It happened. We survived.

As you can imagine, I hardly slept last night. Add to that the alarm clock set for 4:30am and you can imagine how much caffeine was required to get through the day. I was so consumed with all of the dreadful thoughts you just are not supposed to think about when facing a situation like today.

The prep we had done with Kingsley this past week and the hospital tour made such a difference for him! He was calm, he understood what was happening, he completely let it all happen. 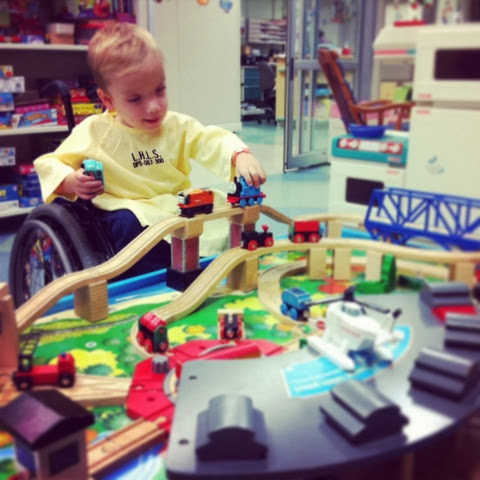 When it was time to take him back, he was calm. He explored the OR a bit and then easily let the Dr put the mask on his face. I talked to him, held his hands and without the slightest quivering lip, he drifted off to sleep. So brave, so very brave.

Surgery took only about 90 minutes. His surgeon was very pleased with how much she was able to stretch his hamstrings. She had ended up doing both ankles once she had a good look at them in the OR. This actually works out in his favour because with both feet evenly casted he can bear weight go in his stander! She also only saw the need to cast him from the knee down and then wrapped zimmer splints over his whole legs.

He woke up in recovery like a true champ. Not a tear, barely a cry until he saw me and wanted hugs. 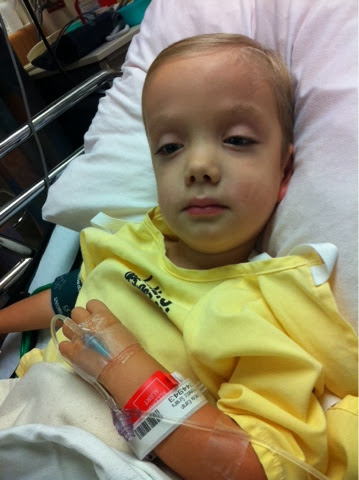 He was a little groggy. We sat him up and showed him his legs. His response was that he would like us to take off those new shoes please, he didn't want them on. 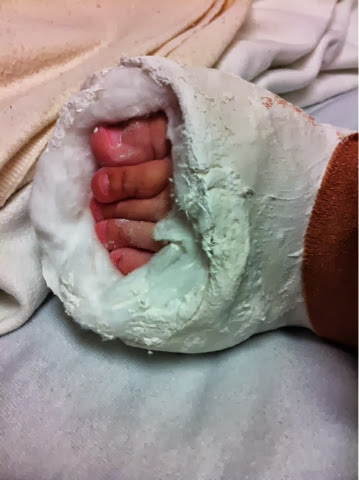 He then turned his head to me and in his raspy-newly-extubated voice said: "Mommy, I wuv you. You're my best fwend." Aw!! Who cares if he was a little stoned, it was the highlight of my day. ;)

It took them nearly 3 hours to get us a bed on the kids floor, so we just hung out in recovery for a long, long time. He did great. He ate Popsicles, played on his iPod and snuggled.

This afternoon, he acted as though nothing at all had happened. The personal TV in his room was a little bit of heaven for him, so the TV coma definitely helped to keep him happy. He also wooed his nurses into showering him with juice, cheese, and pizza. It's tough work being so darn cute. 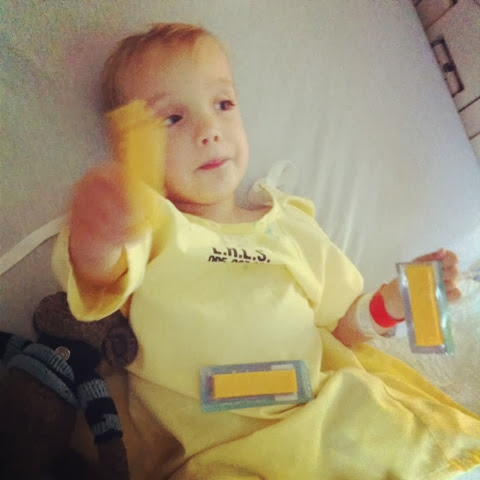 His legs are completely hidden from me. The incisions are small and better left alone to heal, so we are not to touch his splints at all. Next Monday his surgeon will take them off and recast him into lighter, straighter casts. For now, they weigh a ton and are about as wide around as my thigh. Craziness. 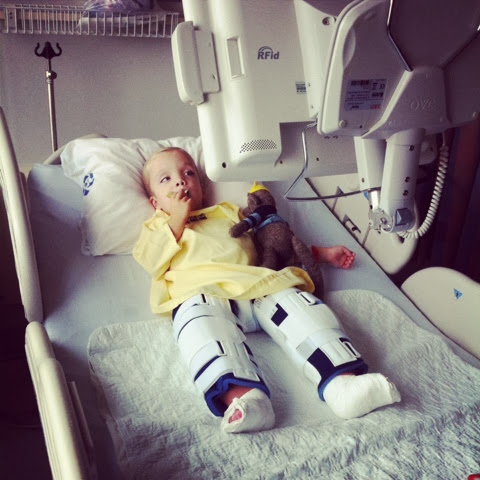 Tomorrow, we should be seeing someone about a wheelchair and a means of driving him home. Then we will be discharged, so long as nothing happens tonight. For now, I'm just thankful that part is over. Time to recover.
Posted by Jill at 9:30 PM 5 comments: Links to this post