Kingsley has had trouble with a syrinx which has resulted in two surgeries to date: a posterior fossa decompression (aka Chiari decompression) and a tethered cord release.  Both of these surgeries are up on the list of Things to Fear for SB families. It's hard to know when to push for tests and when to be concerned. In case anyone ever finds themselves in our position, here is Kingsley's story.

Kingsley was born in January 2010. He had his back closed when he was a few hours old and three days later had a VP shunt placed. A prenatal MRI showed that Kingsley's spine began to split at L5 and was open at S1 and S2.  When he was in the hospital, he was able move his legs down to the ankle and even twitch his ankles and toes. His functioning was estimated to be at about L4 or L5.

For months after he came home, we had nothing but peace, calm and happiness. It was as if SB just wasn't an issue. We talked about walking. Orthotics and possibly a walker at worst case.

Sometime in July or August, I started to realize that he was not moving his legs very much. It had happened so gradually that I still cannot pinpoint when it happened or even when I first became aware of it. By September he almost never moved them. I was told that some kids just functioned higher than their defect. I started to question why this was.  In October, his torso started to weaken. I spoke up. His paediatrician referred him to his neurosurgeon who referred him for an MRI. In mid-November he couldn't hold himself upright in his booster seat and snuggled into me whenever I held him instead of holding himself up.  Almost as soon as his neurosurgeon saw the scans from the MRI, she had surgery scheduled.

Kingsley had a syrinx - a fluid filled pocket - down the length of his spine which was putting pressure on his nerves and had resulted in the loss of functioning. The MRI also showed that Kingsley's Chiari extended down to C3 (C4 is when it causes significant complications) and despite being mostly asymptomatic it was extremely tight and allowing very little CSF to flow through.  Kingsley also had a tethered cord. Both Chiari and tethered cords can be the cause of a syrinx.  It was decided that a top-down approach would be taken and a decompression was scheduled to hopefully reduce the syrinx. 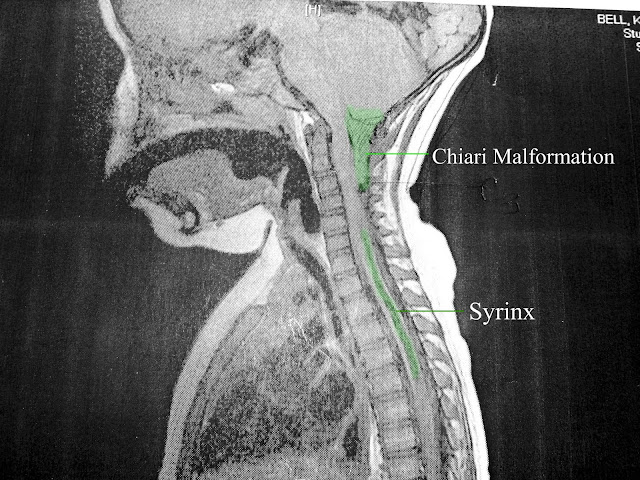 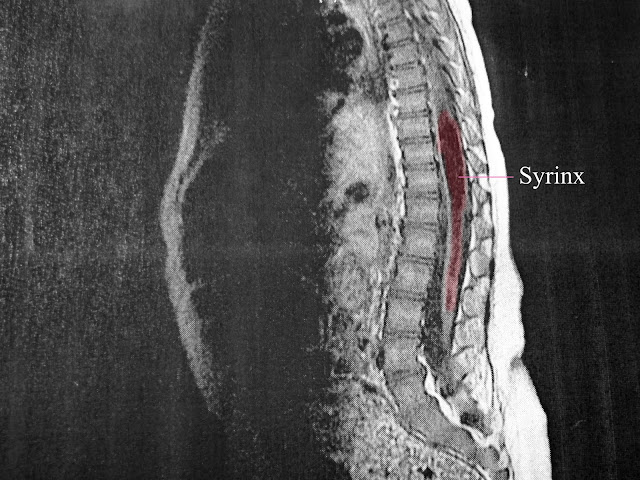 These two pictures are from his MRI in November. The NS coloured the Chiari with her pen - it's not a different shade on the MRI.  I coloured the Chiari and the syrinx so that you know where to look. In the second picture you can also see the tethered cord if you know what you're looking for. I don't. ;)
On November 24, 2010 Kingsley had his decompression. It was a long and scary surgery (for us!). King was in the hospital for 9 days and recovered incredibly well. Throughout the month of December his legs started to move, he was able to sit up independently and play, and he gagged less.  Every day was like seeing a miracle take place.

In January 2011, as Kingsley celebrated his first birthday, we began to accept that as fast as the progress had appeared, it was disappearing. His legs stopped moving. An MRI showed that the syrinx had not shrunk at all. He was scheduled for a detethering on February 2, 2011. A much shorter surgery this time around, Kingsley recovered just as well. After 7 days in the hospital and three weeks horizontal, Kingsley began to bounce back. The progress has been slower, but at two months post-op, again his legs have begun to move. He kicks from the hip again and bends his right leg in at the knee.

It seems that the syrinx has caused permanent nerve damage. His functioning is approximately L1-L2 right now and the likelihood of it improving significantly seems pretty low. However, we are hopeful that this will be the end of the syrinx battle. If the syrinx causes another loss of functioning Kingsley may face another decompression or a shunt placed in his spine to drain the syrinx (a procedure that will treat the symptoms, but not the cause). As of six months post-op, he hasn't had any problems. Things seem stable and we are just fine with that.