The Long Story of Kingsley

Jeff and I decided to try for our third child when Cordelia turned one.  I wanted a baby in January, February, or March if possible because I'm picky like that. Fortunately, I got my way and on Cordelia's first birthday, I got the positive pregnancy test which set my due date as January 26, 2010. 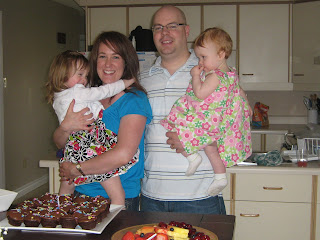 As soon as I got the positive test, I called all of the local midwife offices. I had used an OB for the girls and while she was a fabulous OB, I wanted a new experience with this birth. With this one, I wanted total control and full support. I got in right away with one of the midwife offices on the same day that my pregnancy was confirmed by my GP. Everything was happening just as I wanted it to. 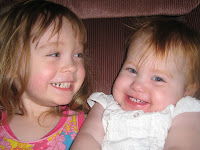 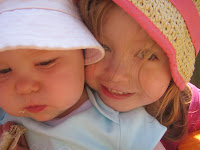 The first half of my pregnancy was pretty standard. I felt horrid and was nauseous before I even tested positive.  I was incredibly busy at work, overwhelmed with having two children at home and feeling guilty about not getting to do any of the fun stuff with the girls through the summer.

By the twelfth week, I was starting to feel a bit more like myself. We had decided to do the IPS (integrated prenatal screening) again, without any fear of it turning up anything unusual.  My first ultrasound was on July 17, 2009. It was too soon to show the gender of the baby or anything other than a good, strong heartbeat and everything else as it was supposed to be. With the ultrasound came a blood test. The second blood test was supposed to be done about 6 weeks later, before the 19th week of your pregnancy. I got busy. Since work, live and had my midwife team in different cities, appointments were challenging to make and keep.  My MW called me when I was 18 weeks pregnant to remind me that my time for the second blood test was running out. I took some time off work and got it done on the last possible day.

September 1, 2009, just days after my blood test, I had a regular midwife appointment. We sat and discussed the usual things before she mentioned that the results of the bloodwork had come in. I had screened positive for spina bifida. 1:5 chances that my baby had it. I recall precisely sitting there, staring at the paper with the 1:5 numbers circled. I listened to her discuss the high rates of false positive screenings. I nodded because I knew this. I knew people who had gotten false positives. This was a false positive. She assured me things would be fine. I had two healthy girls, there was no family history. Everything was going to be fine. My anatomy ultrasound was in two days. They'd look then and see.

I barely made it out of the office before I choked up. By the time I got to my car, I had lost it. Everything inside me was saying one thing: I was having a baby boy and he had spina bifida. There was no doubt in my mind about this.

My second ultrasound was on September 3, 2009.  Jeff came with me and we had a whole plan. I wouldn't mention it. I would wait, read the tech's expression and see if she gave any indication that there was something abnormal. If I told her, she'd be better able to hide it. My plan didn't work. As soon as I lay down, she asked if I had gotten the results of the IPS bloodwork and if it had come back normal. I blurted it all out and the first thing she did was look at the spine. She looked and looked and looked and then called Jeff in. She showed us his spine, his brain, his legs kicking around.  She said the baby was fine. We left there with a blue cookie.  It was a boy.

My midwife got the results of the ultrasound the next week. I pulled over on the highway while driving to work so that I could call as soon as the office opened. I needed to hear it from her, I needed to know that it was on paper.  She read the report to me and in it was a note regarding his head. She couldn't explain it well enough for me to understand: there was something off about his head shape, but it could be nothing, it could be just the projection angle of the ultrasound. It was probably fine, don't worry.  Just to be sure, she'd send us for a follow up ultrasound at the hospital. Just to confirm again that nothing was wrong.

On September 15, 2010 Jeff and I went for the follow up ultrasound. We had plans to take the girls to the fair that afternoon.  I was going to a U2 concert the next day, a wedding that weekend in Ottawa. We had such an awesome week planned, we just had to get this ultrasound appointment out of the way.  The appointment started with a visit with a social worker. Why were we talking to a social worker? She asked what we knew. Confused, we told her about the blood test and the ultrasound not getting a good shot of his head shape. She nodded. That was right, did we know what that meant? Of course we did, it meant we were stuck here getting another ultrasound. That's when she explained Chiari Malformation and spina bifida and how the two are linked. What she wasn't saying was that we weren't here to confirm everything was fine, we were here to find what had been missed. Up until that point, we were apparently the only ones who didn't know that our baby had spina bifida. 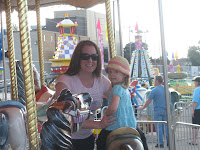 Dazed, we went for the third ultrasound.  Jeff had to wait outside. I lay there, moving when I was told, rolling from side to side for better angles.  The tech didn't talk, she just pushed buttons, made arrows. Arrow after arrow. Each one felt like it was stabbing me in the heart. When she left to consult with the doctor, Jeff came in. All I could say was, "I think he has it." The tech returned with the doctor and they started the ultrasound again. The doctor explained spina bifida and what it looked like on the ultrasound. As he described it, he showed us our baby boy. He showed a normal spine. He described a spine with spina bifida and then pointed to the screen for a visual. "That's where his spina bifida is." Dead silence. I lay there. I could feel the tears, but I couldn't take my eyes off my baby. Jeff asked how sure he was. 99% sure, because he wouldn't discount a miracle.

The tech then asked if I wanted to see my baby. I shrugged and nodded. She scrolled the wand over my belly and his little face appeared. His arms, his heart, his tummy, his legs, and back to his face. He was beautiful. She left and I crumbled.

The next few hours blurred as Jeff and I tried to wrap our heads around the news. We called our mom's. We sat waiting, devastated.  We went back in to the OB's office and sat while a team of professionals described the results of the ultrasound. They told us about spina bifida. They showed us a picture of a spine.  They said it was in the sacral area. They said he wouldn't walk, he may have cognitive impairments, he would be in diapers.  I sat in silence, staring at the picture of the spine and the little labels that described what part controlled what. Nothing they said made sense. The OB said we still had something to consider. I was only 21 weeks pregnant, I still had time to terminate the pregnancy, would we consider that? Jeff said no. They looked at me, but I couldn't even believe they were asking me that.  We asked what our next steps were, but they kept going back to it: we could have an appointment next week. Go home and think it over. There's still time to reconsider. It's a lot of information, they can call us next week.  Jeff got frustrated and told them to just put the referrals through now, we weren't going to reconsider anything.  We left, stunned. 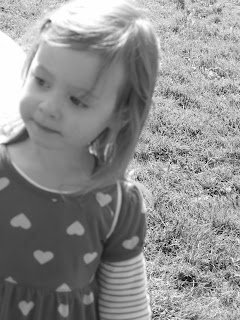 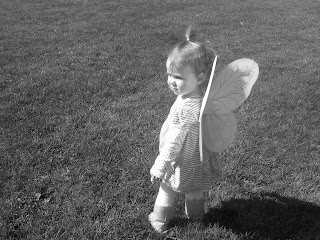 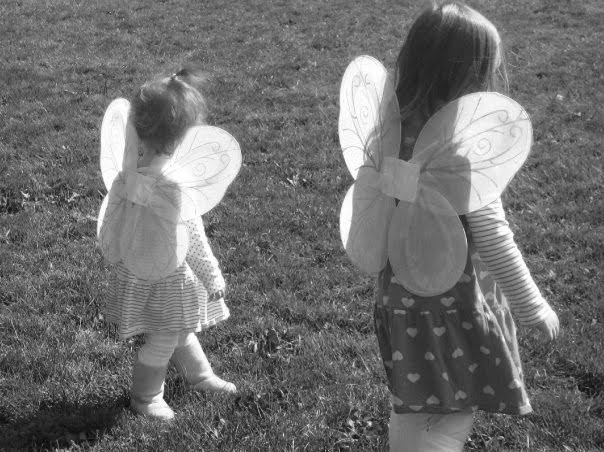 I have no idea how we survived the next few days, weeks, months.  More googling, more questions. Endless appointments.  Everyday felt like one step forward, two steps back. I was referred back to my old OB who was a lifesaver. We met Kingsley's neurosurgeon and members of the spina bifida team.  I found other families online who had been in our shoes or who were in our shoes. They all assured us that this would be okay. This was the hard part, things would be better once he was here. I didn't believe a word of it. 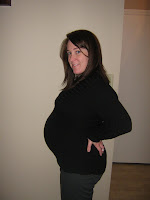 Amongst all of this, life continued.  Thanksgiving, Halloween, H1N1 hysteria.  Work was busy. Jeff got an offer at work that he couldn't refuse. The girls were always there, oblivious to what was going on. Planning for his birth began, so different from the birth plan I had originally envisioned. I decided to finish at work the week before Christmas. My replacement was hired and I was all set to train her. Unfortunately, on my last week at work I started bleeding. I had no idea what was happening. I was sent on a two hour ambulance ride back home and spent 3 days in the hospital as the doctors tried to determine why I was bleeding and whether Kingsley was coming a month early. He was not! My boy remembered that I did not want a baby in December! I was sent home just in time for the Holidays to begin. 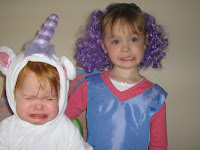 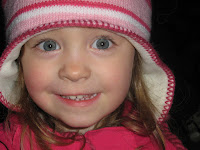 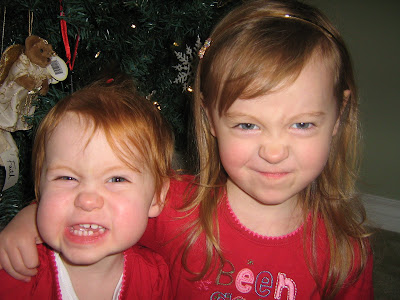 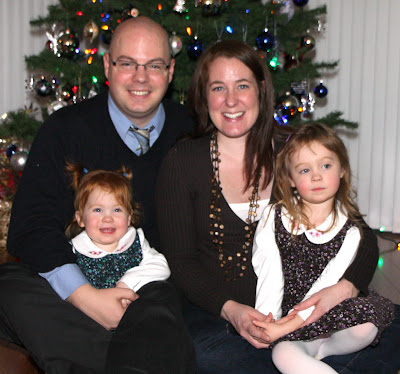 Kingsley's birth date was set for January 18, 2010.  On January 15, I found myself in a panic. I had an OB appointment and a last ultrasound before his birth and I had read the time wrong. I was 30 minutes late. They said to get in anyway, we'd figure it out. I raced to the hospital and had another look at my beautiful boy, then headed to the waiting room for a gap in my OB's schedule. I sat there, feeling uncomfortable. It took about 30 minutes before it dawned on me that I was having contractions.  My OB did not waste any time deciding that Kingsley was going to be born that day. She sent me over to the other hospital where his neurosurgeon was. I called everyone I could and met my mother and Jeff at the hospital. 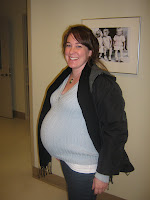 Kingsley Kieran was born at 3:58pm, weighing 7lbs13oz.  He was beautiful. 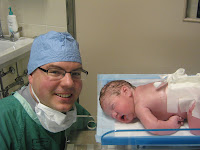 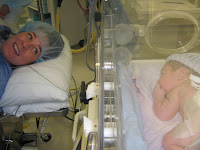 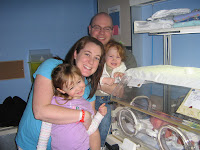 He had his back closed just after 9pm that evening and a shunt put in on January 18.  He thrived in the hospital and was finally allowed to come home on January 26, 2010, his original due date. Everyone we talked to was right: it is okay, things are good, he is amazing. His diagnosis wasn't the end, just the beginning of a new journey. 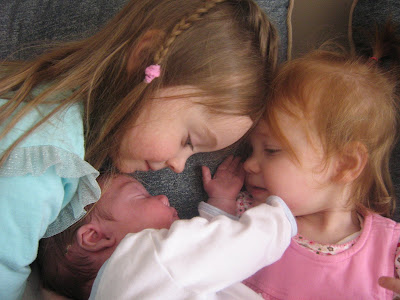 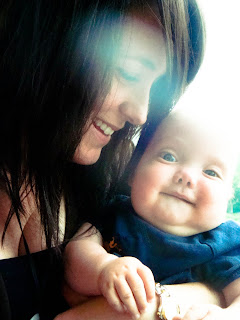 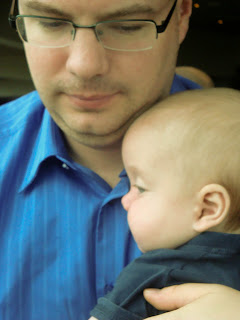