The girls both started preschool for two half days per week when they were 2.5-3 years old. We had planned on doing the same for Kingsley, but then faced two hurdles: 1. we were moving and things were chaotic, 2. I couldn't decide where to enroll him. Now that we've settled, it was my number 1 mission to make this happen for September.

It was slightly challenging finding the right preschool for Kingsley. I wanted something on the end of town we now live on (which ruled out the girls' preschool), it had to be accessible, and they had to want him there. I ended up picking a highly recommended one that I was familiar from having done a placement there waaaaaaay back when I was doing my undergrad a billion years ago. The staff was welcoming, they didn't hesitate when they found out King was on wheels and were already tossing out ideas on how to make the experience better for him when we went to visit. More importantly, after visiting for 5 minutes, Kingsley turned to me and said good-bye, essentially telling me to go away. ;)

Since then, I have had the very surreal experience of people talking to me about signing consent to share information forms, plans for transition meetings with all of this 'people', talks of idea sharing and consults... It makes me giggle a little bit. Once upon a time, I arranged endless transition meetings for parents and therapists, update meetings, consultations, report sharing. Now I'm on the other side of things and it's WEIRD. A kind of weird I'm going to have to get used to, I guess! :)
Posted by Jill at 11:29 AM 2 comments: Links to this post

There's a joke about Canadian seasons: Almost Winter, Winter, Tired of Winter, and Patio. That puts us smack in the middle of Tired of Winter right now, which I find incredibly accurate. April has had us swing from spring-ish weather, to snow, to sunshine, to snow, to t-shirts, to snow again. Tuesday was warm and sunshiney, yesterday, it hailed and today there was frost on the ground. Tomorrow, it's supposed to be nearly 20C. There is just no rhyme or reason to this. 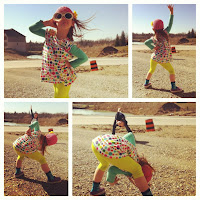 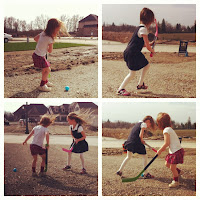 some of the deceptively sunnier days here 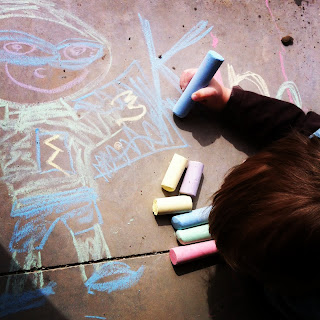 colouring his favourite superhero on the garage floor

In the meantime, we are getting ready for Patio season! The workmen have come to work on our yard all week and it's been fascinating. Kingsley and I have spent most of our days in the garage or at the back windows watching trucks and workmen do their magic. The cement truck arrived today to pour the driveway and I could barely drag the girls out to school, they just wanted to watch. 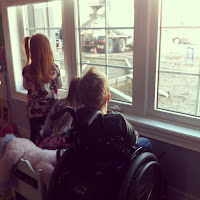 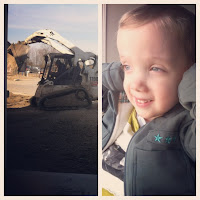 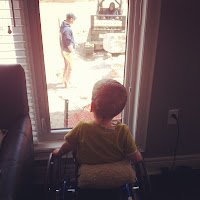 The sunnier days this month have made me so eager to get the yard done. It's been frustrating for both Kingsley and I to limit ourselves to the garage and front porch when we want some fresh air (uneven gravel is no friend to wheelchairs or crutches). Today, they are paving the driveway and the front walk. The other days this week they've done the prep work for that and done the stone/rock work in the backyard, added some of the features to the pool, and prepared the patio for concrete. In the next two weeks they will continue to do the back yard, add fencing, and then eventually we will get grass and landscaping done. So exciting!! 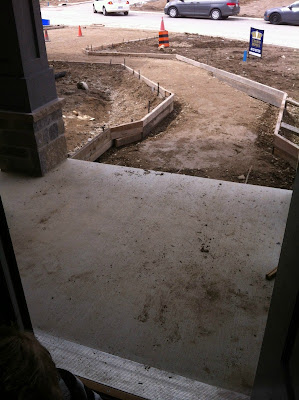 this is the back patio taken from two different windows. the patio has a ramp (where those rocks are) that will end beside the stairs. the gate to the pool will be there. watching the Bobcat place the rocks was probably the highlight of King's month. and yes, it was snowing when I took these pictures yesterday.

As of a couple of days ago, I have ditched the crutches and can walk on my own (finally). I have a long way to go before my knee is back to normal, if it ever gets there, but at least now I can drive and by the time we really do reach Patio season, we will be ready to enjoy it!

Taking One For The Team

Last year, my friends convinced me to join a women's rec soccer team. I had started running after King was born and they assured me that to play soccer, I just needed to know how to run. Turns out, that's kind of like saying that to play football, you just need to know how to squat. I was tackled (while running) in our 6th game and the snap of my ACL tearing off my tibia was so loud it echoed in my head for days after.

So, last Wednesday (we delayed it until after the move) I had my ACL reconstruction surgery. It went fine, from the surgeons perspective, all routine. It was my third surgery - the first was an oral surgery when I was 12 that makes for a great gross-out party story, the second was my c/s when King was born.

I know when Kingsley was born I had heard about women who bounce back and are great, but I was not that woman. My wee babe had surgery on his back and then his brain and the boy was off drugs weeks before I was, acting like it was some foggy memory while I whined and moaned for nearly 9 months. Same with his next two surgeries.

This kid is a superhero or something. I'm not sure where these genes came from or why I don't have any.

I am one week post op on my little knee surgery and I'm still popping pills around the clock, hobbling on crutches, sweating and swearing through PT, and my leg is swollen and bruised every shade from black to yellow from my mid-thigh to toes. Thank God for my parents and mother-in-law or Rachel would have had to be in charge because I'm useless.

I honestly have no idea how Kingsley makes surgery look so easy.

On a silver-lining note though, I can tell you that this house is truly accessibly awesome. I haven't had to go up or down a stair or face any obstacle in the past week, other than the girls bedroom. ;) The elevator rocks my socks and the wide halls and doors are totally appreciated. I can even see why drawers are so much better than cupboards.

In a week or two, I will be off crutches and within the month I'll be allowed to drive again if all goes well. In the meantime, I will endure Kingsley making grossed out faces when I take off my wrap and brace, telling me he doesn't want to see Mommy's owie and to put my 'ups-ups' (his name for his knee-immobilizer braces) back on. I think he secretly thinks I'm a wimp.