Here is where you all become divided into two groups: the first is now wondering if Shacklebolt is Kingsley's last name; the second is now chuckling and wondering if that really is where I got Kingsley's name from. For the second group - yes, it is! For the first group - it's time to read Harry Potter, folks.

When I was looking for a name for Kingsley, I had decided that I wanted something strong and powerful. A warriors name, because my little boy was going to be a fighter and needed a name to match.  I won't take credit for thinking of Kingsley, a HP-loving friend of mine suggested it (and I'm forever indebted, Bri!). I also toyed with Griffin but it made me think of Party of Five more than Gryffindor so it was cut from my list.

For those that aren't familiar with Harry Potter (and I can't imagine why not because it's the best book series in the history of books, seriously), Kingsley Shacklebolt is a tall, black man with a soothing calm voice. Perfect match for a little baby boy, right? ;)  What I love about his character is that he's one of those strong, silent types. He is a well thought-of man who is respected by everyone who meets him in the series.  Throughout the last 3 books you hear about what a strong wizard he is and at the end of it all, he is chosen as the leader (the Minister for Magic) as the wizarding world picks itself up from war and terror.

When I was googling for references to the name Kingsley before deciding for sure that it would be Kingsley's name, I found this quote: "We're all human, aren't we? Every human life is worth the same, and worth saving."  Kingsley Shacklebolt says it in reference to defending the non-wizards (Muggles) during Voldemorts occupation of the wizarding world.  It coincided with my first encounter with someone (other than the doctors that first told us about Kingsley's SB) who essentially told me that Kingsley would have a poor quality of life and perhaps one not worth having. When I read the quote I forgot all about wizards and muggles and only thought of the assumption that a disability or diagnosis of some kind means that a person's life will not necessarily be as good or worth as much. Well, I took that as a sign. Kingsley it was, because my boys life was worth as much as anyone's and it was going to be a fabulous one, SB or not.  The fact that his name comes from Harry Potter is just natural, really, since I spent all three of my pregnancies listening to Jim Dale read the books over and over and over as I commuted to and from work.  One of these kids were going to be a Potterbaby! 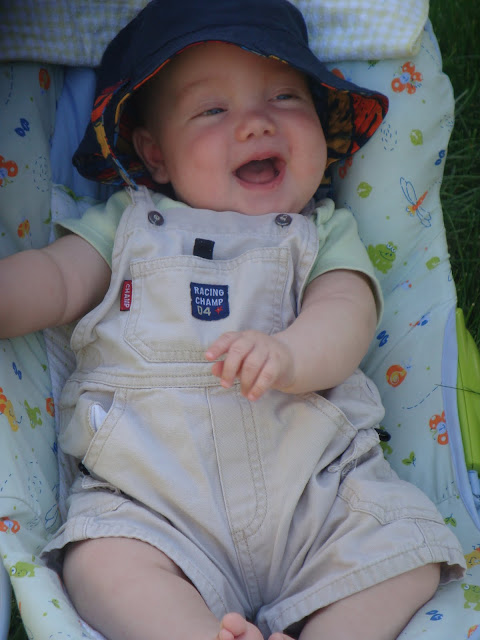 It's received mixed reactions.  I've mentioned before that every clinic or doctors receptionist somehow thinks it's a girls name.  My parents aren't fans of it, but they didn't love Cordelia either and now that's grown on them. A lot of people have never even heard of it.

I hope one day my Kingsley reads about the other Kingsley and loves his name as much as I do.
Posted by Jill at 4:10 PM